{For your convenience, this post may contain affiliate links} 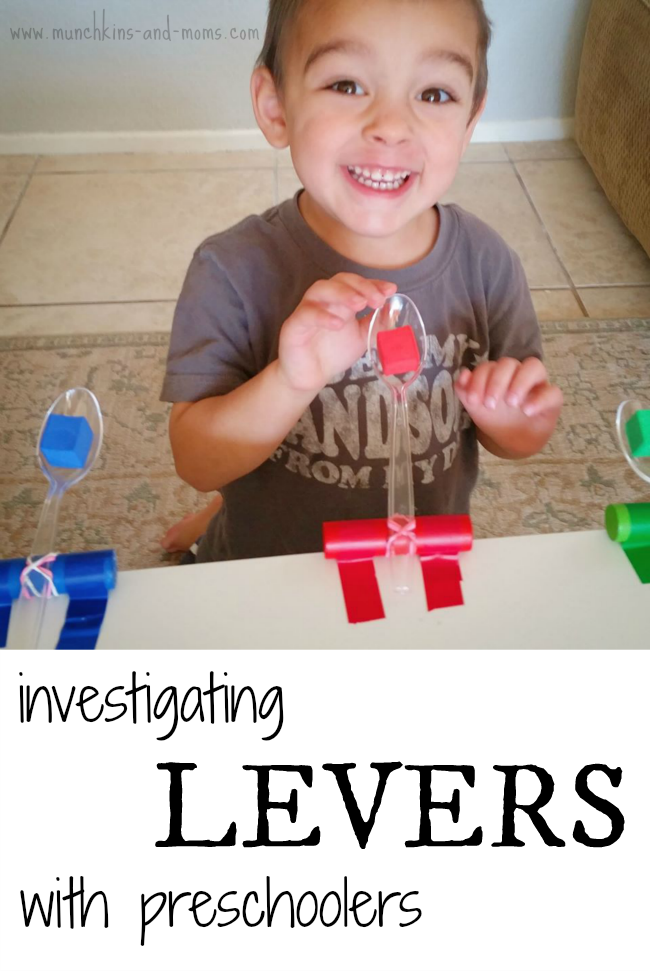 Before I had my boys I was a 4th/5th grade teacher and one of my favorite units to teach was Simple Machines. There were so many incredible hands-on learning opportunities with this unit that I just couldn’t fit it all in. One project I always made time for though was our annual marshmallow catapult competition. So. Much. Fun. The kids had two weeks to design catapults based on what we were learning in our Simple machines unit. On the due date we held a marshmallow launching competition where every student had to show me the working parts of their catapult (a catapult is a type of simple machine known as a lever), then we launched! It was a time filled with measuring, estimating, engineering, and FUN! I looked forward to it every year…
As a now dedicated homeschooling mom, I originally thought I wouldn’t be getting to do that project for several more years and it made me kind of sad. But I couldn’t accept that I had to wait until 4th grade to teach about levers and simple machines! I wondered to why couldn’t preschoolers learn about them as well? Of course they aren’t going to get the full vocabulary lesson of where the fulcrum is located, what the load is, and where effort is applied, but there is still SO MUCH they can learn from PLAYING with simple machines like levers! Thus started our PRESCHOOL INVESTIGATION OF LEVERS.
Supplies:
To make the levers I just wrapped a rubber band around a plastic spoon and a cylinder block (I actually used two rubberbands to make sure they were held together securely). Then I taped the cylinder to the edge of the table. 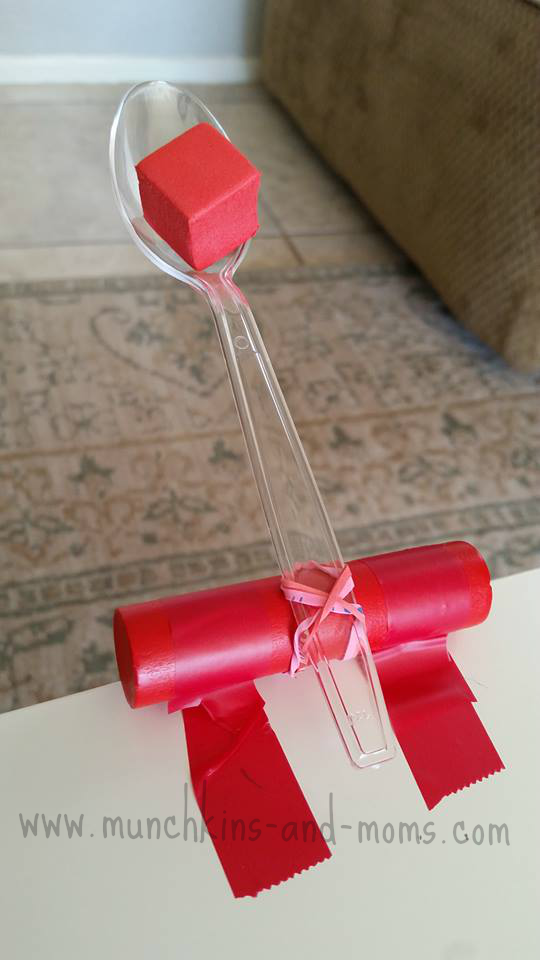 For this investigation, I chose to make three levers with the fulcrum, that’s the point on a lever that pivots between the load and force (in our levers, that’s where the rubber bands hold the spoon to the block.), in three different positions. You can see what I’m talking about in this picture: 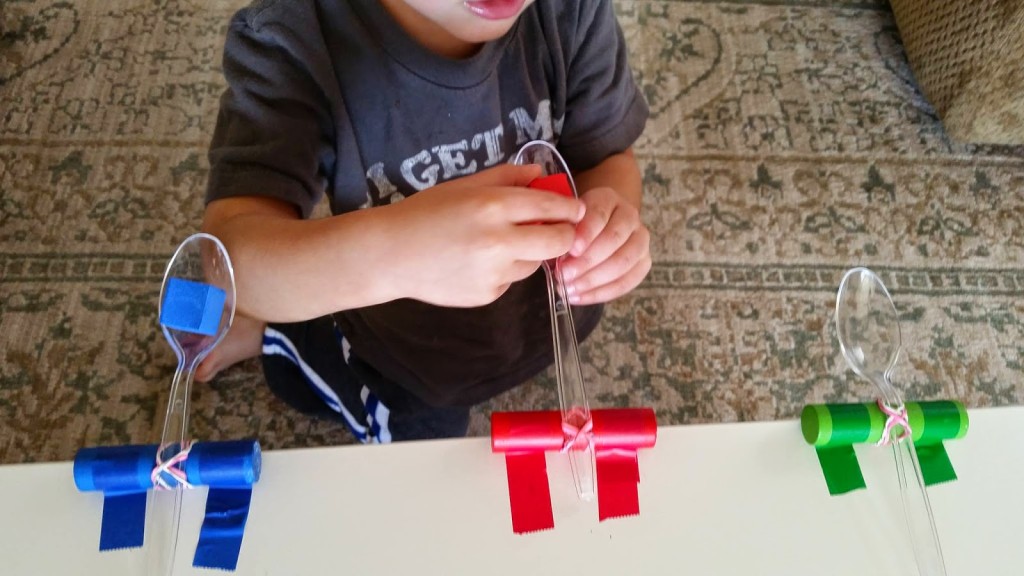 ﻿
The blue lever is balanced near the center of the spoon’s handle. The red lever is held together near the end of the handle, while the green one has the rubber band right near the top of the spoon. Which do you think will launch the blocks the furthest? My son was pretty excited to find out! 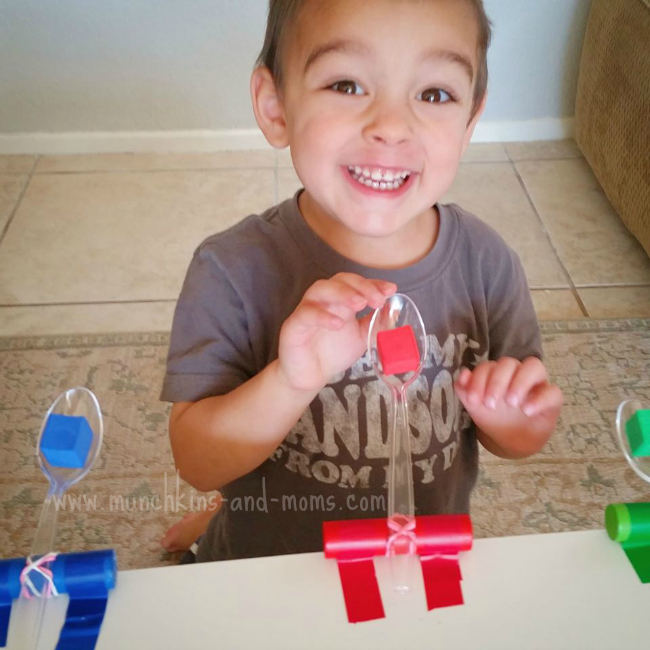 You probably already knew that the red lever would launch the furthest. Did my son know that? Of course not. He hasn’t had any prior experience with levers and catapults, but this was a GREAT way to introduce him to these fun machines! While we played, I didn’t force any vocabulary on him or make him measure or estimate distance. I just let him play- and it is through play that he will begin to draw his own conclusions about levers. He started to notice that the red one gave the biggest thrill with launching furthest. He noticed the green one couldn’t be pulled back very far and actually told me it was “broken” 🙂 As we played, he internalized some basic scientific principles like where the ideal place for the fulcrum should be for launching furthest, and how much force should be applied to the load, and he experienced potential energy provided by the rubber bands and saw the kinetic energy of flying cubes! 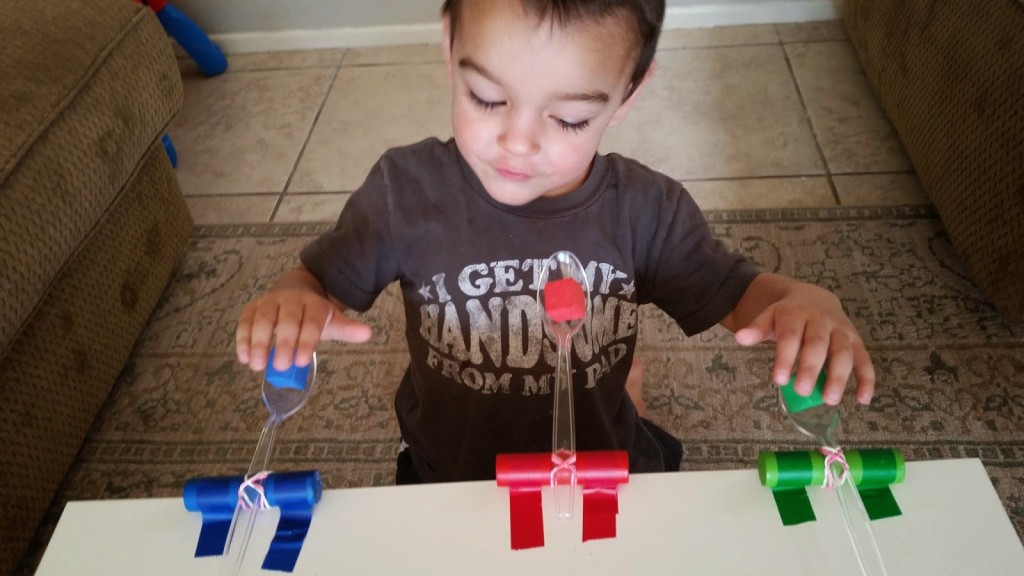 I love that this playful experience helped him build background knowledge about things we will study in more depth later. In my opinion, preschool playful/learning should be just that: building experiences and background knowledge that students can tap into later as they further their education.  For now, we will continue to have fun (and maybe I’ll even let him launch a marshmallow or two) 🙂

Interested in seeing another STEM activity we did? Check out our Salt Dough and Blocks Activity! 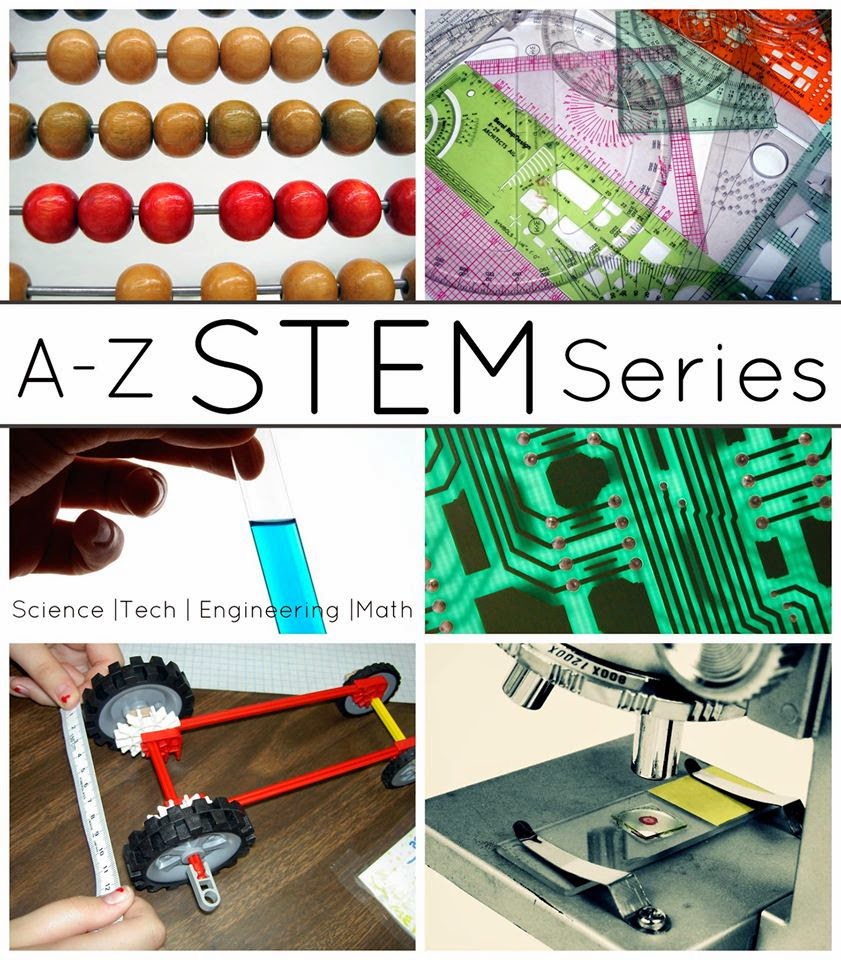 This post has been brought to you as part of the A-Z Stem Series hosted by Little Bins for Little Hands. Be sure to visit the A-Z Series Homepage for STEM ideas listed all throughout the month of January!
Did you enjoy this activity? Be sure to follow Munchkins and Moms on Facebook and Pinterest for more ideas like this delivered to your daily feed!
﻿

7 thoughts on “Investigating Levers with Preschoolers”